I believe the sun has gone into mourning as a few of our friends, five in total, have departed for Canada in the last 24 hours.  It’s paying respect to them having to return to snowstorms and cold temperatures.  That’s my explanation as this certainly wasn’t what I hoped for this weekend.

I was up at 5 a.m. to take friends to the airport.  I took advantage of the moment to throw on a load of laundry just as I was leaving then as soon as I was back, hung it all out to dry.  Not anticipating rain, cause there wasn’t any in my forecast, we headed off to the  Olhão market…….now I have clothes spread all the place trying to dry it!!  I figure if that’s all I have to whine about then life is good.  LOL

We headed off to collect André and head to the market.  As we drove down the tiny winding road to his place we had to stop several times to simply enjoy the vista.

You can’t really tell from this photo but this is enormous. Probably three feet across. I love geraniums, they always make me think of my friend Françoise.

Look at the curiosity and innocence on these faces. Mama has a tiny protective look about her.

Goats, ostriches, chicken and right beside all this, a large dog and a cat. The woman came out of the house and smiled at us and encouraged us to go ahead with our photo taking.

When we arrived to park the deep salty smell of the sea was intoxicating.  We enjoyed our walk along the busy street and lo and behold suddenly I hear my name being called out and I bumped into two people I know from Ottawa area!!! (Oneta and Marcel).  Such a small world.

Although it was cloud covered and cooler than forecasted, the market was quite busy and the focus at many booths today was fresh cut flowers. 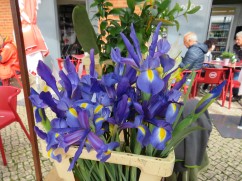 Alstroemeria, commonly called the Peruvian lily or lily of the Incas

And for JoAnn…freesia. We bought this bouquet and our place now smells heavenly. Three euros!!

I’m walking along the busy market perusing the stalls when suddenly I hear my name being called out again.  I turn around and there, sitting on a bench, my friend Sandy Gosnell from London!!  Of course, I knew she was here but I never expected to bump into her at the market as she is staying further east of this part of the Algarve.

We made a few other purchases today….fresh raspberries, beets, fresh cheese for breakfast tomorrow, bread, blackberries and lastly, a bag of dried black figs.  A grand hall for 11 euros!! 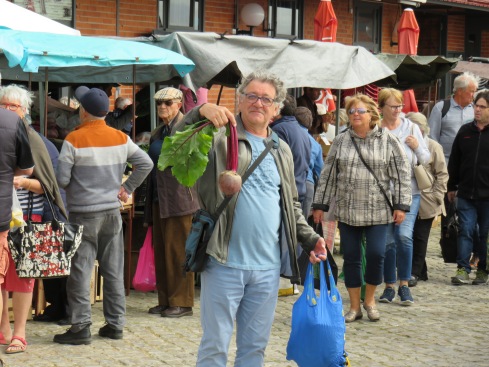 One beet is more than enough for both of us at that size!

Local tiny bananas. I had intended to buy a few but forgot.

We three decided to sit for coffee and a bit of people watching when suddenly, who showed up at our table but Diane…….see, it does come in threes!

By now the wind had picked up a bit and my early rise was catching up to me and home seemed like the best option.  On route I suggested to Marc and  André that we stop for lunch and proposed Dinis’s.  The prato do dia was  Carne de porco com amêijoas (pork and clams).   We dove into it and I forgot to take a photo till the very end!  We each had that many clams.

As we drove down the lane towards the quinta I caught sight of a lovely bed full of freesia and as I promised my sister, JoAnn, I would photograph some for her, we pulled over and I took a couple of snaps.  I wish I could have captured and was able to share with you, the scent.  Heavenly, delicious, intoxicating…………my list of adjectives could go on and on.

And finally, for you Joann.  Breath deeply.   I love you.

8 thoughts on “Where Has the Sun Gone!!”